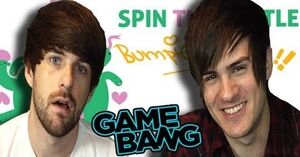 The Smosh Games crew play Spin the Bottle: Bumpie's Party for Wii U.

Despite those results, Lasercorn was announced winner along with Anthony who had the best score.

The original punishment was that the two lowest scoring people have to spin the real bottle and lick someone in the earlobe but as Anthony and Lasercorn were announced winners, there were 4 losers and punishment was changed so those 4 would spin the bottle and lick someone in the earlobe. Joven was pointed by the bottle three times so because of lack of ears, they made Mari lick his nipple.