Dwayne Douglas Johnson (b. May 2, 1972), also known by his ring name The Rock, is an American actor, producer, and semi-retired professional wrestler. He was "interviewed" in the Interview Pranks episode The Rock Interview Prank.

The Rock Interview Prank is a prank interview which Dwayne was told was supposed to be about Hercules but really is Anthony talking to Ian through an earpiece telling him to say very embarrassing things to Dwayne.

Dwayne Douglas Johnson, also known by his ring name The Rock, is an American actor, producer, and semi-retired professional wrestler. He was a college football player for the University of Miami, where he won a national championship on the 1991 Miami Hurricanes team. After being cut from the Calgary Stampeders of the CFL two months into the 1995 season, he began training for a career in professional wrestling, following in the footsteps of various family members. Widely regarded as one of the greatest professional wrestlers of all time, Johnson gained mainstream fame in the WWE from 1996 to 2004 and was the first third-generation wrestler in the company's history. He returned to WWE part-time from 2011–2013 and continues to make sporadic appearances.

Johnson's first leading film role was in The Scorpion King in 2002. For this, he was paid US$5.5 million, a world record for an actor in his first starring role. One of his more prominent roles is Luke Hobbs in The Fast and the Furious. Likewise, Johnson is known for often starring as a main role in big-budget action films. He hosted and produced The Hero, a reality competition series and has since continued to produce TV shows and films through his production company Seven Bucks Productions. In 2013, Forbes listed Johnson No. 25 in the Top 100 Most Powerful Celebrities and he has been in the top twenty every year since.

The thumbnail for The Rock Interview Prank, starring Johnson and Ian Hecox 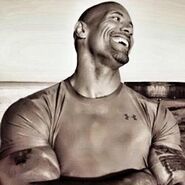