Smosh Wiki
Register
Don't have an account?
Sign In
Advertisement
in: Articles in need of citation, Articles requiring cleanup, Articles to be expanded,
and 19 more

David Moss (born April 23, 1984), more commonly known as Lasercorn, is an American YouTuber and a part-time member of Smosh Games. Before coming to Smosh, he worked at Mahalo Games and Clevver Games with Joshua Ovenshire and Matt Sohinki, both of whom joined Smosh Games with him in September 2012 when Clevver merged with Smosh to create Smosh Games. On August 5, 2017, Lasercorn announced that he, along with Sohinki, were no longer full-time members of Smosh Games. However, between 2017 and November of 2018, Lasercorn still made occasional appearances on the channel - notably for videos such as BIGGEST GAME BANG EVER! and both seasons of Smosh & Order.

Following the seventh SmoshCast teaser, SMOSH GAMES IS BACK!, it was revealed that both Lasercorn and Mari would be returning to Smosh Games as part-time members. He last appeared in Mystery Top Hat Challenge! - Max Gentleman

In the past, Lasercorn appeared on both Clevver Games and Mahalo Games, and in 2011 Lasercorn's first appeared in Lasercorn's 1st Vlog on his YouTube channel. On September 2012 he joined Smosh Games, along with Jovenshire and Sohinki. He also has his own channel called Lasercorn, which was created on February 26, 2013.

From June 2014 to 2017, Lasercorn's hair had been dyed orange. He had to dye it this colour after losing a Cage Match to Sohinki, the footage for which can be seen in 22nd June 2014's bonus video. As an added forfeit, he had to keep it this color for an entire month. He admitted on a Twitch stream that he was too lazy to dye it again (either orange or his natural hair color), so he was going to wait until it washed out. He also said that he had been considering dying it again, with either red or green, but he may have been joking. Lasercorn later revealed that he'd been secretly hoping for an excuse to dye his hair orange for some time, and that if you looked closely at the original video in which he lost the Cage Match, it would be clear that he was not trying as hard to win as he normally would.[7]

Since his original dye job, Lasercorn has made many alterations to his hair, but has almost always stuck to different variations of orange. For some time after his original color change, he let it grow out to its original brown, before dying it orange once again in the February 2015 video EXTREME HAIR MAKEOVER. Later, after a promise to do so if a third Star Wars Battlefront game came out, Lasercorn had his hair shaved into an imitation of the Jovenhawk, fittingly dubbed the "Laserhawk". A few months later, he briefly dyed his hair blond, before returning to the original orange. In mid-2017, he began dying his hair in a mixture of orange and yellow, before adding red to his hairstyle later that year. In early 2018, the colour of his hair was a faded mixture of red and orange, before he had his dye job redone once again. As of 2019, the sides of his hair remain bright orange, fading to a paler orange on top of his head.

On August 5, 2017 Lasercorn uploaded a video on his personal channel, titled Lasercorn's Next Step (originally titled "Lasercorn Leaving Smosh Games?") stating that he was no longer a full-time member of Smosh Games. He explained that he stood down because he wanted to be able to have his own schedule and spend more time with his son. He also says that it was his own personal choice and he is still close to everyone on Smosh Games. The next day, he, Sohinki, YouTuber Amy Lynn (misshabit) and Pamela Horton, Ian's former girlfriend, created the channel ToasterGhost. Despite no longer being being regular Smosh cast members, Lasercorn and Sohinki continued to make occasional appearances on the channel.

When Defy Media first announced it would close down its Beverly Hills office, Lasercorn posted a video explaining what that would mean for Smosh and the different consequences it could have. When Defy announced the complete shutdown of the company the following day, Lasercorn posted a second video telling people not to bother watching the first because of how much had changed since it was posted. In this second video, he disclosed that he was one of many ex-employees that Defy owed money to, expressed concerns over whether Smosh should search for a new parent company, and gave a generalised confirmation to any companies that any time a job applicant spent with a Defy-owned channel should be considered an asset.

Additionally, Lasercorn made a statement in the video inviting everyone from Smosh and Smosh Games to collaborate with him anytime. True to his word, he shot many videos featuring Wes, Joven, Mari and Sohinki that aired across all their respective channels, and included Damien in later uploads. Lasercorn also made guest appearances on Matt Raub's Scener series "Cringe Party", where they reacted to cringeworthy movies and TV episodes.

In the seventh episode of SmoshCast, Lasercorn officially revealed that he would be returning to Smosh Games when the channel relaunched, along with Mari. Although it is currently unknown whether or not he has returned on a full time basis, he has since been shooting videos more frequently with the cast. Smosh Games officially returned on April 10th, heralded with a studio tour, while their first 'gaming-centric' video was uploaded on April 13th, 2019, featuring Ian, Courtney, Damien, Mari and Lasercorn competing in a Mortal Kombat 11 Tournament. 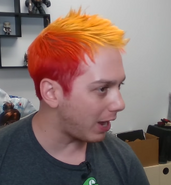 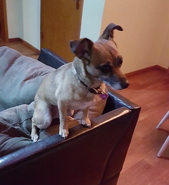 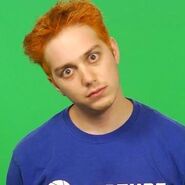 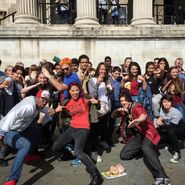 Lasercorn, Mari, Flitz and Wes with a crowd of fans in Trafalgar Square, London 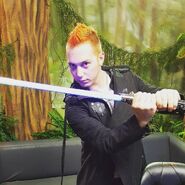