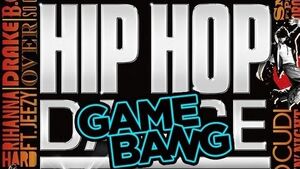 It was uploaded on February 1, 2013 on both smosh.com and YouTube.

In this, the 3rd dancing Game Bang, the crew plays The Hip-Hop Dance Experience.

The two lowest scoring people would have to do a "sexy" duet dance.

Turn order and songs danced to: