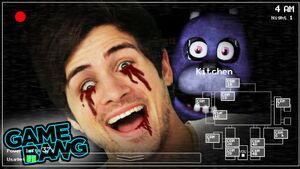 DEADLY CONCLUSION TO FIVE NIGHTS AT FREDDY'S is the 104th installment of the Smosh Games series Smosh Game Bang. It was uploaded on September 19, 2014 on both smosh.com and YouTube.

See Scared to Death by Five Nights at Freddy's for punishment details.