Metaphysical Being (according to Boze)

Eat It Or Yeet It: For The Gals

Shayne Topp
Courtney Freaking Miller is a parody-based character played by Shayne Topp. She first appeared as a substitute for the real Courtney Miller when she was sick during the filming of the Smosh's Seriously Super Stupid Sleepover episode WE'RE IN GAME OF THRONES W/ CLEVVER.

Courtney Freaking Miller is clearly a version of the real Courtney Miller, but she also (in her own words) seems to be some kind of metaphysical being, portraying a darker, twisted side of her. Her gender is uncertain; while she is referred to as female by herself and her only known friend, others have referred to her as a "he", and editors have been known to refer to her using "they". Courtney herself is quoted as saying: "I am not a "mister" - I am a mystery!"

The Courtney Freaking Miller character can be described as aggressive, macho, "ghetto" and slightly psychotic; her erratic temperament is known to have been brought on by extreme drug usage on at least one occasion. She is freakishly strong and is implied to have superhuman capabilities; out of the many people she has appeared with in videos, most seem to be at least slightly scared of her.

Despite initially being a joke character that was only supposed to appear while the real Courtney was away, Courtney Freaking Miller became extremely popular with viewers, and the character has since developed into a recurring feature. Due to her increasingly regular appearances and the expansion of the character, many viewers describe her as growing in power and intimidation. 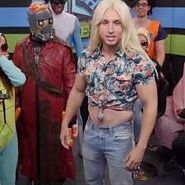 Courtney Freaking Miller in 2017. Her outfit is based on the one in this picture.