Should Courtney Get Hypnotized? w/ Podcast But Outside - SmoshCast 28

Cole Hersch is an American YouTuber and former Viner who works at Smosh as a writer and occasional actor. He is also the co-host of the podcast Podcast But Outside with Andrew Michaan. Both have appeared as guests on SmoshCast.

Cole got his online start on Vine, and amassed around 480,000 followers and 40 million loops by the time of the app's shutdown. On Vine, he portrayed a character named Cornib Bleau, a wildly out-of-touch Internet personality who records intimate moments and bloopers and can never seem to pronounce his own name, let alone get the punchline to any of his own jokes. In 2015, Cole launched The Cornib Bleau Show on YouTube, in which he awkwardly interviews other Internet stars.

Cole has worked at Smosh since at least 2017, and has since primarily worked on main channel sketches, including episodes of Every Blank Ever, The Big What If, and If It Were Real, as well as an episode of Smosh Pit Weekly.

In 2019, Cole and Andrew Michaan launched their podcast Podcast But Outside, in which they discuss various topics and feature guests and passersby, all filmed outside. 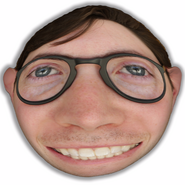