Captain Marvel is a character based on the superhero of the same name. She was introduced in 2019 and played by Courtney Miller.

Captain Marvel is based on Captain Marvel, a superhero character from the Marvel Cinematic Universe who debuted in the 2019 film Captain Marvel. In the film, Captain Carol Danvers, also known as Captain Marvel, is a former United States Air Force pilot who obtained cosmic powers upon being exposed to the energy of the Tesseract. Her memories were removed as she was made into a Kree-Human hybrid and she became the Kree's weapon and a member of Starforce. During the Kree's war with the Skrulls, Carol returned to Earth, with help from Nick Fury and Maria Rambeau, and began recalling her past. Danvers also discovered that Yon-Rogg, her Kree mentor, had been manipulating her for years and learned that the Skrulls were only seeking to find a new home free from war. With this, she unlocked her full power and defeated the Kree invasion onto Earth that was being led by Ronan the Accuser, before setting off out to the far reaches of the galaxy to finish what her late mentor Mar-Vell had once started.

Twenty-three years later, during the aftermath of Thanos' Decimation, Captain Marvel received a distress call from Fury and returned to Earth to find the surviving Avengers.

Captain Marvel appears in the second scene. She proudly introduces herself before being interrupted by a comics nerd played by Ian Hecox, who chuckles and explains that, while he does not "want to be that guy", he feels that since Captain Marvel was originally a man in the comics, he was a better representation of something, but what exactly that is is not said before he is interrupted as Captain Marvel shoots him with a photon blast.

Captain Marvel in her scene 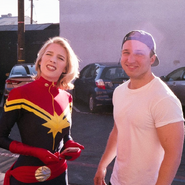 On-set photo of Courtney in costume with Shayne Topp[1] 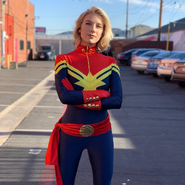 Retrieved from "https://smosh.fandom.com/wiki/Captain_Marvel?oldid=160964"
Community content is available under CC-BY-SA unless otherwise noted.