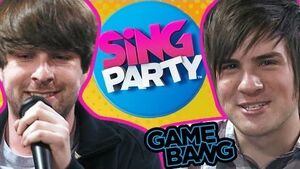 COVER YOUR EARS, WE'RE SINGING is the twenty-fifth installment for the SmoshGames series Smosh Game Bang.

It was uploaded on 15th March 2013 on both smosh.com and YouTube.

The Smosh gang sing it out on Sing Party for the Wii U.

Whoever got the lowest score would have to sing Baby by Justin Bieber. At the end of the game, it was also decided that the loser would have to wear a Bieber wig AND the Dress of Shame.