CLOP MAKES US ALL LITTLE PONIES 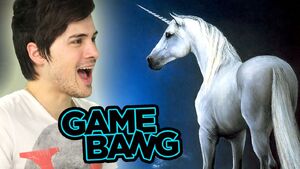 CLOP MAKES US ALL LITTLE PONIES is the eighty-second installment of the Smosh Games series Smosh Game Bang.

The player who achieves the shortest distance will have to act as a horse for the winner (with the farthest distance) who will ride him/her.

Ian, Sohinki and Anthony got around the same distance so they called it a tie and in the end they won together. Mari didn't make it to the rock where Ian, Sohinki and Anthony lost but got average distance. Lasercorn got the worst distance though they had to check the footage to decide if it was Lasercorn or Jovenshire who actually lost. In the end, Jovenshire got even better distance than Mari. The standings for this episode would be: