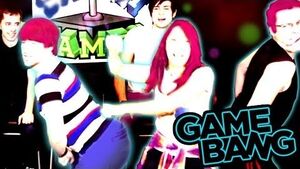 BREAKING IT DOWN IN 2014 is the fifty-eighth installment of the Smosh Games series Smosh Game Bang.

The Smosh Games crew dance their hearts out once again playing Just Dance 2014.

Like the first two Just dance Game Bangs, the two people with the lowest scores would have to do a sexy dance with each other, but this with one person wearing an orange wig and the other a small pink tank-top.

Note: The song highlighted in bold indicates it was the one song everyone knew was in the hat.