Smosh Wiki
Register
Don't have an account?
Sign In
Advertisement
in: Smosh Games, Why We're Single, Videos,
and 2 more 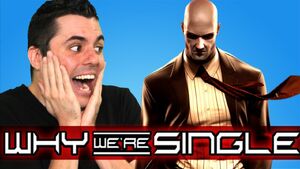 Best Dressed Game Characters is the seventy-eighth installment of the Smosh Games series Why We're Single.

His first choice is Adam Jensen. His duster, while ridiculous in real life, suits him very well. Adam also has glasses that he extend or retract from his face that can be used as punctuation for his quotes.

Secondly, Altair has a versatile coat adorned by numerous straps for hiding weapons and gear.

Blackbeard from AC4 particularly appeals to him for his appearance epitomizing pirate style. His beard, guns and hat particularly look cool. As well, his jacket and wigs added to the gritty aesthetic.

His other choice is Sir Hammerlock. His style is so pronounced, you can almost see his accent. It is suggested by his mustache and safari attire.

Finally, Dante from DMC is Joven's next pick. Much like how Jensen's duster, Dante's red leather coat is a difficult piece to pull off.