Artists vs TMNT is the 45th episode of Epic Rap Battles of History, and the twelfth and final episode of the series' third season. It features Ian Hecox and Anthony Padilla from Smosh as well as Rhett McLaughlin and Link Neal of Rhett and Link as four Renaissance artists in a rap battle against the Teenage Mutant Ninja Turtles of the same names. It was released on July 14, 2014.

The two Renaissance artists in question played by Ian and Anthony are Michelangelo Buonarotti and Raphael Sanzio da Urbino.

[Note: Both Leonardos are in blue, both Donatellos are in purple, both Raphaels are in red, and both Michelangelos are in orange. If either group is rapping at the same time, they are in regular text.]

Cowabunga, dude, so let's get it on.
Reptiles against the fathers of the Renaissance.
We got the classical technique
To kick these three toed freaks back under the street! (Ooh!)
I take a turtle, and I turn him into mincemeat.
You don't really wanna step to da Vinci.
I love the ladies; I like to keep it mellow,
So let me pass the mic to my man, Donatello!
(Ugh!) Hard shell, but you're gross in the middle.
Wouldn't wanna touch you with a six foot chisel.
Born in goop, raised in poop,
I slice through a group of ninjas like fruit. Oops!
(Yo!) Raphael, and I came to flow!
Deemed dope by the Pope, and I boned 'til I croaked!
I'm an emcee Shredder, but I get the feeling
I should pass it up to my man on the ceiling!
(Ohhh!) Michelangelo, and I'm a giant!
I made David, but I'll slay you like Goliath!
I'm a rap God, and you can't quite touch me!
This battle's your Last Judgment, trust me!
We drop science!
We got the mathematics! The architects of rebirth are rap addicts!
You beat the Foot, but it won't go well
When you catch an Italian boot to the half shell!

The wisdom of our master (Splinter)
Taught us not to rush to violence, (Master Splinter)
But our master (Master Splinter)
Ain't here, dude! (Hee-yah!)
I don't think you wanna mess with my katana blades!
Get back in your floppy helicopter, fly away! (Ohhh!)
I can bebop and steady rock a mic, sucka!
I'm a pristine Sistine nun chucka!
(Ugh!) Oh hi, I'm a cool but rude guy!
Put you back in school with the tip of my two sai!
(Uhhh…) Dona-tell me who you are again, dude,
'Cause I don't Gattamelata clue what you do.

That's because you mutants are too immature!
You wouldn't know genius if it pissed in your sewer!
We got the talent, and the minds, and the rhymes so sweet!
We're like your NES game 'cause we can't be beat!

Yo, go ahead and hate. We'll just skate on by!
You guys draw more dicks than New York Pride!
We're the TMNT, drop-kicking Italy! (Go! Go! Go! Go! Go! Go! Go!)
Chowing on your tower made of pizza! Save a slice for me! 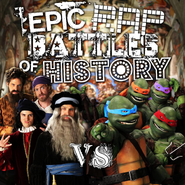 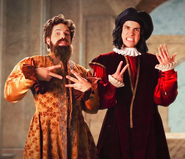