IT'S STARTING TO HEAT UP

Amra Moore Ricketts (b. May 31, 1987), also known as FLitz, Flitz, Ra or Nerdsworth, is a YouTube personality, singer, actor and dancer. He was a part of Smosh Games, officially joining the lineup in 2014, but left on January 4, 2018 in order to legally combat accusations of sexual assault by several women on social media, while not wanting to "risk having a negative impact" on Smosh Games (and Smosh as a whole). The accusations were reported on by major online news sites the same day, with FLitz's future with Smosh Games unknown. As of 2020, Smosh has yet to directly address the accusations against Ricketts, though most of the cast have since reunited with him to create outside content.

FLitz first appeared on Smosh Games with the rest of the LAN Party crew NODE) in their Video Game Olympix collaboration. He has later became a regular on the channel, appearing most commonly in Grand Theft Smosh, I Have a Raging Bonus, Why We're Single, Smosh Game Bang and Maricraft, while also making occasional appearances in Top 5. He also made an appearance in the 85th, 86th and 95th and most of the recent Game Bangs. He was initiated (along with Wes) as a full member of Smosh Games on October 12, 2014.

He is known to be one of the less chaotic of the group, to the extent that in an episode Maricraft, the usually kill-happy Lasercorn stated that he had no interest in killing Flitz. He is known for his prowess in both fighting games and dance games.

In Grand Theft Smosh he is known as the "blackup" or "Blackquaman"; and "Homie Attenbrough" in Maricraft.

Similar to Wes, Rickett's addition to the Smosh Games crew was met with favorable reactions from the YouTube community. Many of the comments expressed love towards Ricketts, with many claiming that he is "hilarious," and that he is "a great addition to Smosh Games."

On January 4, 2018, FLitz released a statement on why he left Smosh Games:

"I wanted to let all of you know that effective immediately, I’m leaving Smosh Games" he said that Thursday, from his Twitter account. "Last week I was accused of some of the worst things imaginable by a group of old friends and former roommate. While I deny all allegations against me, this community, my family at Smosh Games, and the team behind it mean so much to me. I cannot risk this having a negative impact on them."

FLitz would later join the old Smosh Games members: Sohinki, Mari, Lasercorn, WesTheEditor, and Jovenshire in NE6. The members made NE6 during the quarantine of COVID-19 and stream and play there as a group as of April 1st, 2020. 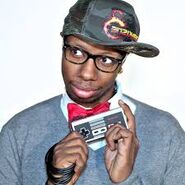