"Wii U Sports is Awesome!"
"Addicted to Honey Boo Boo Child" is a Smosh video and the first installment of the "Addicted" series.

In My Strange Addiction, Ian tells the viewers that people are saying he is addicted to Honey Boo Boo, which he says he is not, even though he has many pictures of her on every wall in his room. After watching Honey Boo Boo, Ian starts laughing at it, but when he sees the camera, he acts like Honey Boo Boo was so stupid. A black screen with "facts" appears, and the narrator says that Ian watches 5 hours of her every day which is 8,000,000+ hours a year. Without converting this quantity in any way, the narrator states that it is almost bigger than Texas and England combined.

Anthony is the only person who knows Ian's problem and invites them to talk about Ian. Two scenes show Anthony walking down the street and eating cereal without a spoon and drinking soda while watching TV. Anthony knows that Ian is addicted to her and says it is beginning to get worse, to the point where Ian even started to talk like her. At Bub's BBQ in Sacramento, California, Ian starts to order cheese balls after the waitress asks for Ian and Anthony's orders. The waitress couldn't understand what Ian was saying and he said it again while also showing his belly, demanding cheese balls. Ian starts throwing a tantrum, splashing his drink everywhere before the other employees had to come in and remove him from the restaurant. Another black screen appears; the narrator says that Ian eats 500 cheese balls a day, which is 20 trillion of them a year and some lions mate over 50 times a day.

Ian says that he is not addicted to Honey Boo Boo and saying he is always like this. The cameraman asks what Ian was drinking, which was what Ian calls his "go-go juice." The cameraman wants to know what is in it, which is "caffeine drink [coffee, or possibly an energy beverage such as Red Bull], soda, peanut butter, hot sauce, and a little bit of X-Lax." Anthony has decided to take Ian to get medical help for his condition. As Anthony was about to take Ian to get medical help, Ian tells Anthony he is dressed up as Honey Boo Boo ready to go to a beauty pageant and Anthony becomes disgusted, telling Ian he needs help. Ian did not feel like it, calling himself Ian Boo Boo Bear. Anthony felt confused, but Ian says it is his new name. Yet another black screen of so-called "facts" appears, and the narrator says that Ian spends 200 dollars per week on make up, which is enough to buy 560 pounds of chicken feed and adding that 99% of all Americans believed in everything they read.

Sharon has been brought to the house to witness Ian's addiction for the first time. She is seen with a shopping cart, making a wrong turn and getting stuck to the bottom of the edge. As Ian was posing like Honey Boo Boo, neither Anthony nor Sharon accepted what Ian has become, which Ian thought she doesn't love him anymore. At that point, Sharon hated her life and said, "F**k my life." One more black screen appears and the narrator says that she disowned him and in her sorrow, literally ate herself to death.

Anthony explains to Ian that he is dressed like a 4-year-old girl and is about to enter a beauty pageant, adding that people are going to think he is a pedophile. Ian starts to talk more like Honey Boo Boo, to the point where Anthony cannot understand what he is saying, but the viewer can because they were given subtitles. However, it gets worse when Ian starts talking gibberish, in which even the viewers cannot understand him, even with subtitles. In order to bring back Ian, Anthony says to him that he wants his best friend back, which Ian apologizes and they both cry like 4-year-olds. Anthony is delighted that he overcame his addiction and became his normal self again. As well, Anthony says he doesn't even know how someone could be addicted to "something disgusting". He says he wants to be done in order to see a film with his garden flamingo Steven.

The next scene is about Anthony and his relationship with Steven. He is seen going to bed with him and taking him for a stroll. Anthony complains about the cameramen doing an episode about him because he thought that "true love comes in many forms". He is even seen about to have sex with Steven. 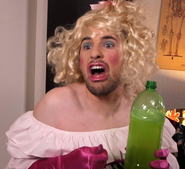 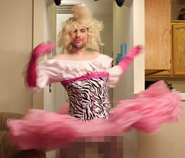 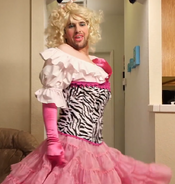 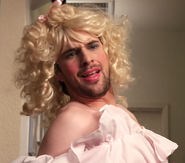 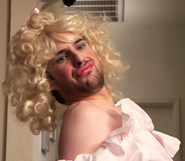