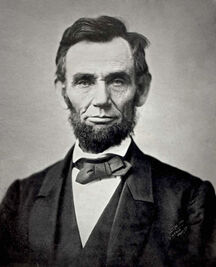 Abraham Lincoln (February 12, 1809 - April 15, 1865) was the 16th President of the United States of America from March 4, 1861 to his death on April 15, 1865. He was responsible for the abolition of slavery in America and was President during the American Civil War. He was assassinated by gunshot by John Wilkes Booth at Ford's Theatre while watching Our American Cousin in 1865. In the presentation of Ian Hecox's family tree made by Smosh, Lincoln is apparently shown to be Ian's great great great great grandfather and he also Appeared in the Teleporting Fat Guy episode "The Un-Assassination of a High School President".