A FISTFUL OF PLAY-DOH! 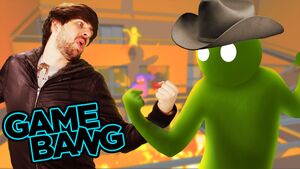 A FISTFUL OF PLAY-DOH!!! is the ninety-fourth installment of the Smosh Games series Smosh Game Bang.

The Smosh Games crew battle it out in Gang Beasts.

The two losing players have to eat a play-doh concoction made by the other 4 players.

Note: Ian, Lasercorn and Mari had a sudden death match to determine the second loser, which Ian lost.