A Day in the Life of Smosh (Video) 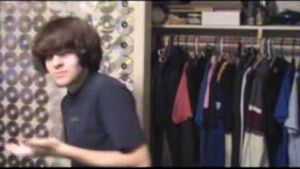 A Day in the Life of Smosh is the first video uploaded on IanH channel. It is also the first episode in a series of the same name, uploaded on March 17, 2006.

It is a first of series of "documentary" videos made by Anthony and Ian, showing their normal life. It's made in well-known at that time Anthony's room. Smoke It To The Rope and a Soften Suicide can be heard playing in the background by the metalcore band Versus the Mirror as Ian fools around with boxes and pizzas. Some curses can be heard since they never edited them out. Anthony says "Look at Ian's hair, it looks like a little bowl on his head" so his famous bowl-haircut is present since the very beginning (though that early version has so long bangs that his eyes can't be clearly seen). Then, for the very first time (and only) we see a short glimpse of Anthony's real mom. Later, as a camera moves around the room, we can see some of Anthony's music bands posters (Deftones and The White Stripes among them). Near the end of the video, Ian shows a scene from South Park on his phone. As Anthony's turning the camera off, he tries to wave goodbye with a sexy voice but after that admits that it was "pornography reference".