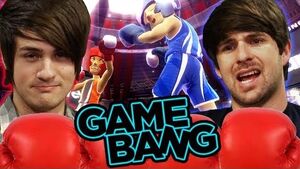 A BOXING MATCH FOR THE AGES is the forty-fourth installment of the Smosh Games series Smosh Game Bang.

There's a boxing game on kinect. Yeah, we gotta do this.

Punishment is most likely the most hilarious boxing match up, you've ever seen

The two lowest scoring people have to fight with Socker Boppers.

Retrieved from "https://smosh.fandom.com/wiki/A_BOXING_MATCH_FOR_THE_AGES?oldid=168999"
Community content is available under CC-BY-SA unless otherwise noted.