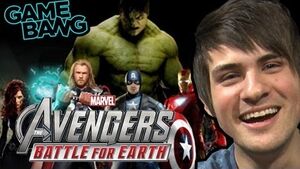 AVENGERS WORKOUT is the twenty-eighth installment for the SmoshGames series Smosh Game Bang.

The Smosh Games crew battle in The Avengers: Battle For Earth Kinect game.

The ultimate loser has to call gamestop and ask for the non-existing Hulk game while talking like the Hulk.

Note: Jovenshire either cheated or forgot that he had 1 win because when they revealed scores, he said he has 2 so he participated in a rock-paper-scissors game and eventually avoided punishment despite having the worst score. Lasercorn lost the game so he had to speak like the Hulk in the end.