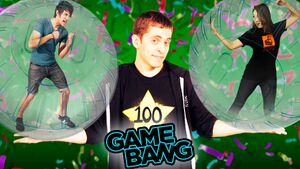 It was uploaded on 22nd August 2014 on both smosh.com and YouTube.

The Smosh Games crew battle in a game created by them with hamster balls in teams of three. The rules were that one person was to get inside the ball and others were to push the ball to throw the enemy's ball out of the battle circle. After the first round the rules were changed so teammates cannot push their team ball, they have to push the enemy ball instead.

Losing team is going to get inside the ball together and be pushed from the hill.

Note: Winning team had to win 3 rounds out of 5 but as the first round ended in draw, they started counting from round two.

Retrieved from "https://smosh.fandom.com/wiki/100th_EPISODE_SPECIAL_-_HAMSTER_KATAMARI!?oldid=171015"
Community content is available under CC-BY-SA unless otherwise noted.